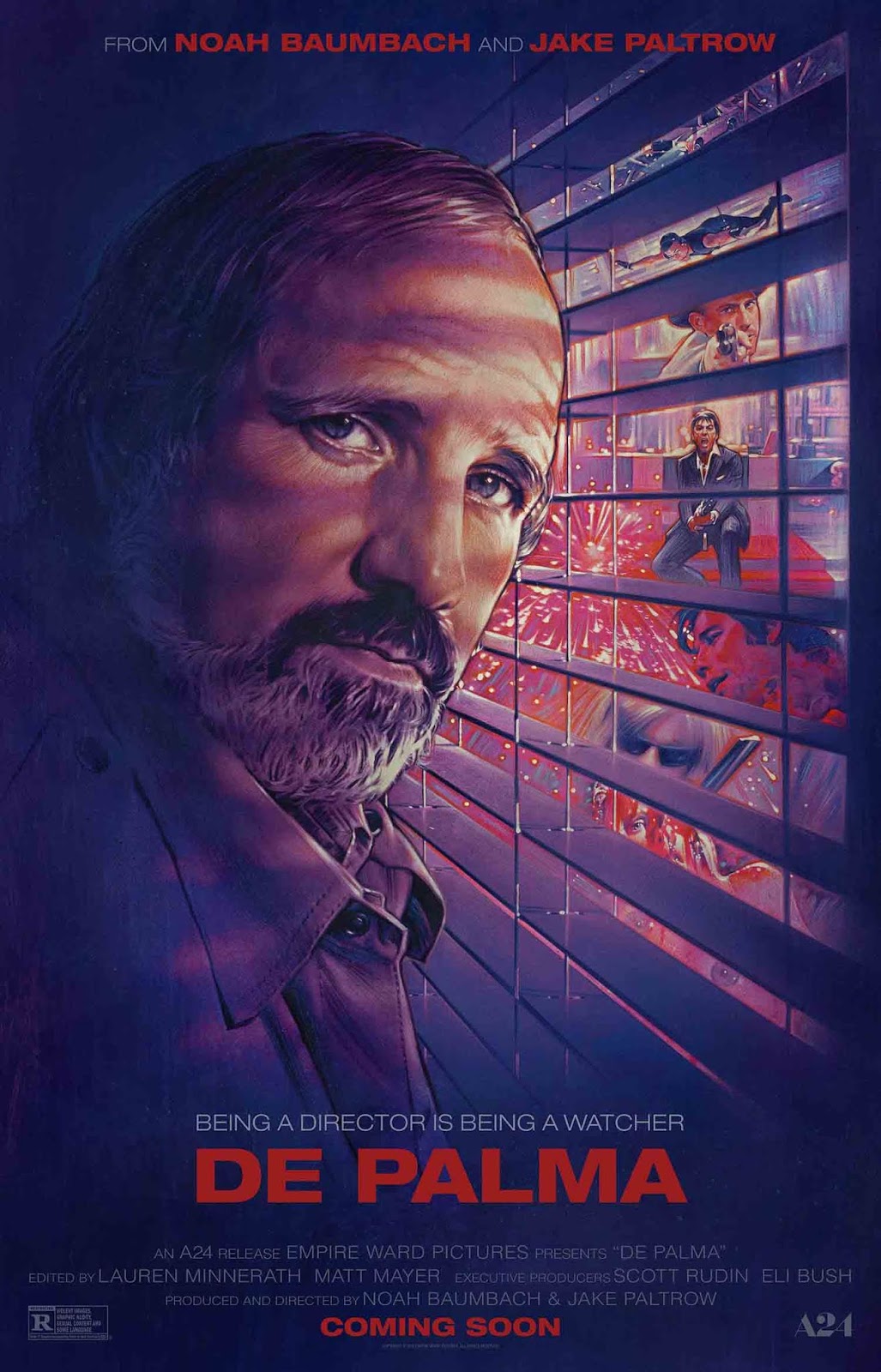 by Sherif Awad
A not so great documentary about a great filmmaker is the 2015 (released late 2016 online and on other media) De Palma by the directorial duo of Noah Baumbach and Jake Paltrow who went to interview the great American-born writer-director Brian De Palma where he is based now: Paris, France. The documentary can only serve for De Palma’s fans to recapture his works from his early days till now or for new audience to discover his thrilling films for the first time. The reason: the documentary was shot like a one-time interview that is interrupted by scenes from De Palma’s films with no analysis or insights from the two filmmakers apart from De Palma’s great own commentaries, facts and trivia.
In the documentary, De Palma explained how his own life as a son of a surgeon and his viewing of films by Alfred Hitchcock and Orson Wells influenced his decision to become the writer and director of several psychological thrillers not to mention gangsters’ classics like The Untouchables with Robert De Niro and Scarface and Carlito’s Way both with Al Pacino. Speaking of Scarface with Al Pacino that was at the time written by Oliver Stone, this film received a great admiration worldwide even in Egypt when people, educated and uneducated, rooted for Al Pacino’s character: Tony Montana, the Cuban refugee in the US who becomes a Miami drug lord. Here in Egypt, many young people had T-Shirts with Montana’s photos although they were mistakenly pronouncing the name of the star like that: “Albanchino”. Scarface influenced our own cinema to the point that it drove a young Tarek al-Erian who has just returned from the US after film studies to create an Egyptian remake al-Embarator (The Emperor) with Ahmed Zaky playing the Egyptian version of Tony now renamed Zenhom for remake purposes. Of course, the late Zaky was often considered the Egyptian version of Al Pacino and Robert De Niro. With the latter, Zaky has a photo with Mohamed Khan while attending festival. As for Pacino, Zaky also played an Egyptian remake of another one of his classic films: Serpico, renamed in Egypt as Ard El-Khof (Land of Fear).

Back to De Palma, the documentary shows clips of his early films made during the late 1960s like The Wedding Party, Greetings and the 1970’ Hi Mom! that they all marked first appearances by a then-unknown Robert De Niro. De Palma’s following films during the following decade concreted his name as a new director with a very special visual style highlighted by unconventional camera angles, flowing camera tracking shorts, split screens and long takes (see the Carlito’s Way exciting subway chase).


In addition to his action and gangsters’ films, De Palma wrote and directed many enjoyable psychological thrillers that tackled voyeurisms and split personalities that merge dreams and realities. He was also the director of the first Mission: Impossible film starring Tom Cruise which became a franchise till nowadays. I believe that De Palma left Hollywood to seek European finances for his latest films like Femme Fatale and Passion because he directed, according also to his opinion, two films that criticized the American invasion of other countries: Casualties of War about Vietnam and Redacted about Iraq.